Our property is situated on what was once the bed of the White River, before it changed its course many years ago. The surrounding area has seen people travelling through it for hundreds of years. An archaeological dig revealed human remains of Chinese origin, supporting the theory that there was once a land bridge between the continents.

The mail route from Southeast to Northwest Alaska during the early 19th century went through the hills on one side of the property and is still clearly visible from the air. Mail and furs were transported by dog teams from Skagway to Chistochina, Alaska’s oldest community, and to the Hudson Bay Company outposts. 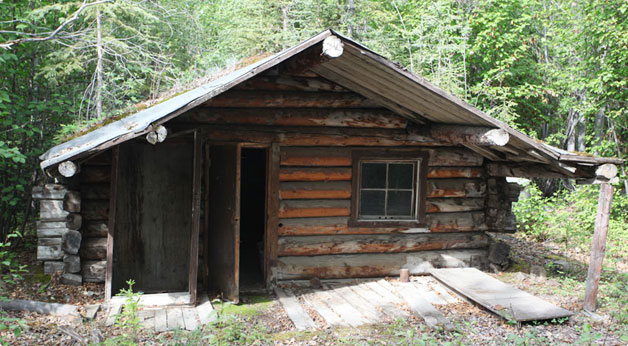 There were numerous copper mines in the surrounding mountains. Rafts and barges were built during the winter to transport the excavated ore down the White River to Dawson City on the high water caused by spring break-up. Then, a sternwheeler carried the ore down the Yukon River to Whitehorse. From there it went by rail on the White Pass & Yukon Route to Skagway. The large piece of copper on display outside the MacBride Museum in Whitehorse was sourced close to here.

Journeying through the area, I have seen the reality of bygone times in a coffee pot or a harness nestled in a tree branch, items left behind or placed for safekeeping as the owner continued his or her journey.

The Lodge was built using lumber reclaimed from a nearby US Military base camp shortly after the construction of the Alaska Highway in 1942. Each piece of lumber is stencilled “Base Camp 4”. In the following years it operated as a highway lodge, peaking in the 1990s when it was open 24 hours, offering dining, fuel, and accommodation. However, as a result of road enhancements and modern vehicles, travellers are now able to drive for longer distances without the need to stop for food or fuel. This has led to the decline and closure of many highway lodges. Our lodge has been renovated and now offers new restrooms, new showers, and a Wi-Fi hot spot. Significant improvements have been made outside over the past years, including the creation of a wildlife pond and additional RV sites.